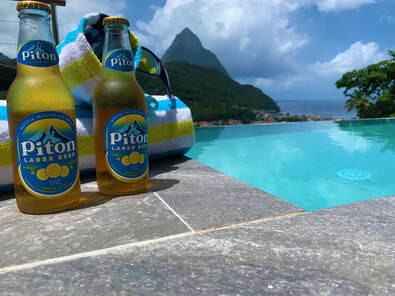 The Brief History of Piton Beer
Light and airy as one would expect a tropical beer to be, Piton Beer was first brewed in October of 1992 by Windward and Leeward Brewing, Limited- which is owned by globally popular beer maker Heineken.
Piton Beer Is Known for Award-Winning Flavor
​Whether you reach for a bottle of traditional Piton Beer or one of their delectable flavored varieties such as Piton Shandy Lemon or Piton Shandy Ginger, you are in for quite a treat.  Don’t just take our word for it, however.

​Piton Beer (including many flavored varieties) has won countless international awards, including a host of gold and silver medals at Belgium, France, and Prague.  That’s pretty impressive for a beer that isn’t yet thirty years old.
Where to Find Piton Beer
​If you’re looking to sample Piton Beer, St. Lucia is the place to be.  While it can be found in other Caribbean locations as well as Caribbean stores internationally, there’s nothing quite like popping off the top of an ice-cold Piton Beer while actually seeing their namesake in the distance or while dipping your toes in the tropical waters of the Caribbean.

In fact, we make Piton Beer available to virtually all of our guests.  Whether you are utilizing our airport transfer service, taking one of our exciting St. Lucia tours, or enjoying Green Fig and Saltfish or another delectable dish prepared by the private chef service in one of our villas, you will find that we offer Piton Beer for your enjoyment as well as local St. Lucia rum punch.

There’s nothing like kicking back poolside at Saba Villa or Sargas Villa, admiring the Pitons only a short distance away, which enjoying a frosty beer bearing their image and namesake.
About the St. Lucia Pitons
For those of you visiting St. Lucia for the first time, the Piton Mountains from which the beer takes its name are perhaps our most renowned attraction.

From the summit you can see the expanse of the island around you as well as the lush Caribbean waters.  Our guided excursions are a great way to climb the Pitons, and you can bet that an ice-cold Piton Beer will be waiting for you when you arrive! 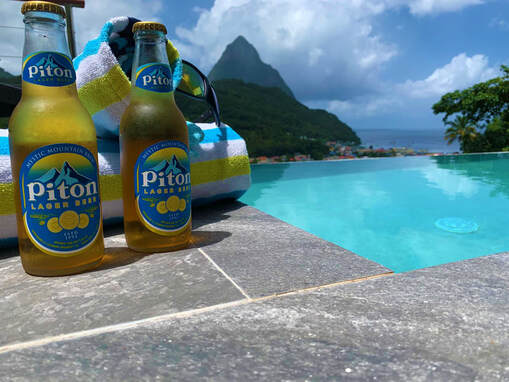 In short, no trip to St. Lucia is complete without a tasting of Piton Beer.  There is a flavor variety for virtually anyone, and the cool, light taste is as tropical and refreshing as the island itself.

​Whether you are just arriving on the island, enjoying your time in one of our majestic villas, or preparing to take a dip in the nearby Sulphur Springs volcano, a cold Piton Beer is simply a request away!